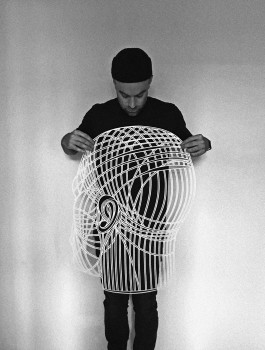 Max Gärtner’s artworks possess an intricately unique voice which he has refined over the years. Gärtner creates his art in Bali and Berlin, drawing inspiration from the different realities and cultural narratives in his environment. His sculptural wooden and paper-cut pieces have been exhibited in numerous art fairs including Scope Miami Beach, Contemporary Istanbul, as well as an artist residency in Luanda, Angola (ELA).

In 2019 he presented his first film Ghosts And Gods during the Gallery Weekend Berlin with EIGEN+ART Lab. His latest solo show with Víctor Lope Arte Contemporáneo gallery encapsulates a union of technical mastery and bold expression. 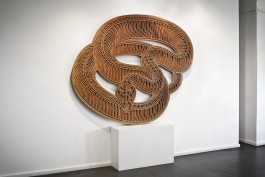 Having completed his Graphic Arts degree in Barcelona in 2008, Max Gärtner began his journey as a visual artist through being involved in various projects with his art collective, while also working independently as an illustrator and character designer in the animation industry. Throughout the years, Gärtner has been prolific in his artistic output; constantly refining his technical process and creative approach.

His artworks have evolved as he integrates a deep curiosity towards cultural narratives that explore inner worlds and human connectivity. Gärtner is inspired by the ancient animistic lineage of cultures around the world that utilize visual storytelling as an act of worship and reverence. This interest in symbology and primordial myths is what propels him to capture other-worldly impressions in his work.

Monumental power and complexity are communicated through his highly intricate creative process. Much like his subject matter, Gärtner’s pieces are visually unique and captivating. The role of each line is paramount in his work. Every stroke, cut and contour hold an important and unshakable space within the form presented.

Currently the Spanish/German artist lives and works in Berlin and Bali, where he creates artworks which are exhibited worldwide in galleries and art fairs.

“I consider the hand-drawn line to be of extreme importance. It is the foundation of all my works. To draw by hand represents, to a certain extent, presenting one’s most inner self— there is no room for deception, the spectator receives an unadulterated insight.”

BACK TO TOP  ∧